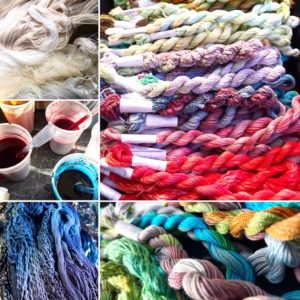 I have had a busy couple of weeks getting prepared for two art/craft fairs last weekend.  As if I didn’t have enough to prepare last minute I decided that it was time to roll up my sleeves and dye the yarn I had prepared a few weeks ago.  I am not quite sure why it has taken me so long to do this but eventually  the yarns were put in water bath to soak. 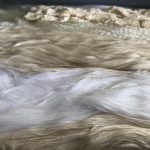 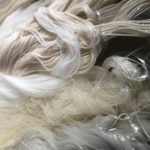 Next step to mix the dyes and paint it onto the yarns – I am not the tidiest person in the world but I tried my best not to make too much of a mess. 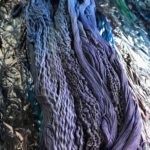 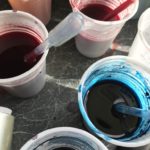 I am not sure why I chose last Wednesday to dye but the day I chose to do my dyeing was the same day I  had to wash my husbands shirts for his works conference the following day.  I was so careful not to have the dye anywhere near these however some things just don’t quite go to plan.  Whilst ironing these shirts later in the afternoon, I noticed a bright red dot, then another, then another; I discovered dye on three of his shirts.  How did that happen? I asked myself, however at this point I knew I was not going to be popular! 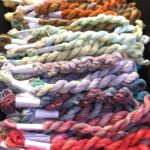 As they were already ruined I thought a bit of bleach might remove the dye, unfortunately this only faded theprint on the shirt and the red dots remained, oh no!  I then had to hide the evidence until I had confessed.  I threw loads of different stain remover products all over the shirts and popped them into the washing machine on a hot wash.  I did confess 🙁 hung my head in shame and apologised, he was relatively understanding considering the predicament I had put him in.  Then the washing machine beeped and I went to show hi 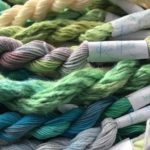 m the damage.  When I pulled the shirts out of the washing machine some kind of miracle had occurred as all of the dye had disappeared – all that remained was the slightly faded areas where I had thrown on bleach in a fit of panic.  I cannot tell you how relieved I was.  It was only then that I could appreciate the beautiful array of colours I had dyed. I will carefully choose my next dyeing day 😉

The dyes were mixed with flowers as the inspiration.  Here are some of my flower inspired dyes:

These yarns were launched this weekend at the Holy Trinity Church in Jesmond and then in the Maritime Centre in Newbiggin by the Sea.  Follow me on Facebook to keep uptown date with my next fair.